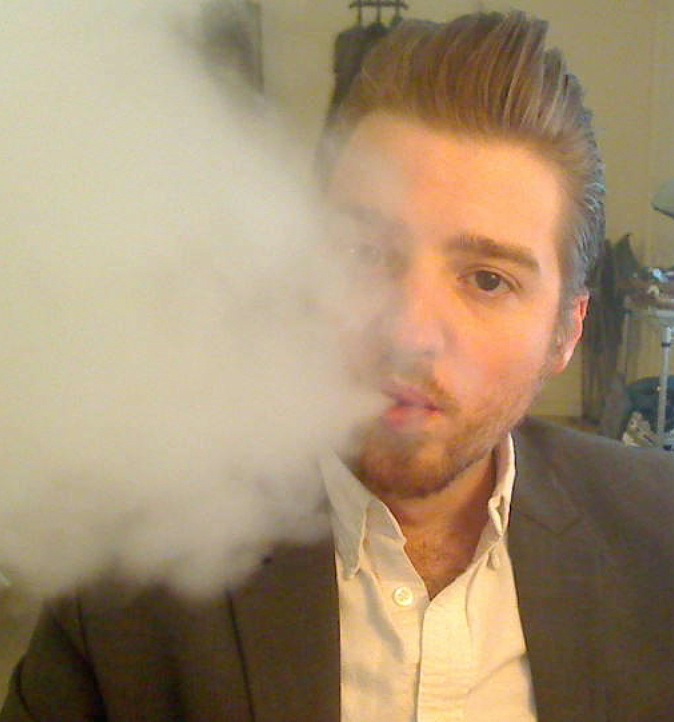 Blowing clouds in my apartment.

How I Started Vaping

Like a lot of people, I got into vaping because I was a smoker and I wanted to quit. I smoked between a pack and a pack-and-a-half of Camel cigarettes a day. I never expected to be a smoker — in fact, during my teenage years I was aggressively against the idea of smoking. But few people develop an addiction on purpose.

An addiction to tobacco can sneak up on you. For me, a variety of things upped my cigarette usage. Getting into lawn care was a major factor. You’d think that after working a 16-hour day in the hot sun that the last thing you’d want is a smoke. But in fact, the difficulty of the job was the main thing that got me into smoking. Dealing with difficulty is why a lot of people turn to cigarettes.

But the statistics are brutally clear: If you keep smoking cigarettes for a long time, there is a pretty good chance they will kill you, or at least cause a serious and debilitating chronic illness. This was always on my mind while I was smoking. So after this past Mardi Gras, I did what a lot of people do in New Orleans, whether they are Catholic or not: I gave up something for Lent. I wasn’t going into this planning to quit smoking. I just wouldn’t smoke a single tobacco cigarette from Mardi Gras until April 17 — approximately 40 days — and after that I would see what happened. Setting this stubborn and precise line worked for me.

Why Vaping Has Helped Me Quit Smoking

I believe it wouldn’t have worked if I hadn’t decided to use vaping to curb the habit during Lent — I believe I would have slowly returned to tobacco. Instead, I began my vaping journey. I had no idea how far it would go.

I started with Green Smoke. I had purchased a few Blu and Njoy e-cigs in the past, and they didn’t do much for me. The Green Smoke cig-alikes were miles ahead of those two brands for me: Green Smoke had more options, lasted longer, and was more customizable. Soon enough I wanted to see what else there was out there. I went to a brick-and-mortar e-cig shop and bought my first “device,” a mysterious (and in my mind, silly-looking) Evod tank on top of an eGo battery.

At first, I totally loved the vapor, flavor, and nicotine hit I got from this thing. But I was a little embarrassed to be walking around with a weird-looking device. Quickly, though, I fell all the way down the vaping rabbit hole. (I use that term lovingly).

Soon I wanted to try variable voltage, and I wanted a dual-coil compatible tank like a Nautilus or an Aerotank. I wanted smaller but still powerful tanks like the Mini Protank 2. I made the shift over to high-VG e-liquids because their flavors were nicer and subtler, the throat hit was softer, and they produced more vapor.

I had heard vapers insist that rebuilding your own coils was superior. I tried an Igo with a tiny single air hole, built a mediocre first coil, and while the vape was better, I didn’t see what the fuss was about. When I bought a Kayfun, I realized what people meant. Even later, when I bought a Stillare, built a better quality and lower resistance dual coil, I was blown away. Each new step in vaping was a new, fun experience.

I learned about Ohm’s Law, battery safety, safe sub-ohming, mech mods, and regulated box mods. My experience with that first Igo versus my experience with a Stillare is a great example of what’s amazing about vaping. You only know what you like if you try new things and explore. Vaping is a personalized, educational, and endlessly entertaining pastime.

A Hobby That Can Save Your Life

The single most important reason that vaping keeps me away from cigarettes is the hobby aspect of it. The quest for a better vape experience is one of the most fun, engaging, and technically interesting hobbies to come along for me in a while. I learn more about vaping every day. I make my own e-liquid now, and perfecting this alone could take a lifetime.

Importantly, even with all the buying for this hobby, I still am spending quite a bit less than the $6-10 a day I used to spend on cigarettes.

Vaping and the Public

In the eight months since I bought my first cig-alike, the vaping world has exploded. Many people know more about e-cigarettes and don’t find them as weird as they once did. But, there is a strange animosity toward it, to the point that I have encountered more protests and doubts from strangers while vaping than I did while smoking.

Some smokers who quit cold turkey feel that they have quit smoking more correctly. And without a doubt, it’s harder to do and shows more willpower. But everyone is different, genetically and conditionally. Smoking has a much stronger hold on some than on others.

Quitting smoking is not a competition, it’s a life-saving goal. I can’t see the problem with relying on an aid to help you through an addiction. However you move away from cigarettes, it’s better when you’re there.

I have also encountered plenty of people who are simply fascinated by vaping, want to learn more, and are grateful to see more people moving away from smoking.

Where I Am Now

As for me, each new vaping discovery is still a pleasure. Right now I switch between a Big Dripper clone, a Tobh clone, a Stillare clone with a Chuff Enuff, and an iStick with a Magma or Veritas on top.

The big not-so-secret secret for me is that there is no vaping end game, and there shouldn’t be. I foresee a future, perhaps a long time from now, when few people smoke tobacco anymore because e-cigarettes are just that good.

It saddens me that many wheels are in motion — like proposed federal regulation — that jeopardize this possibility. But, it gladdens me to think of all the people who will turn to vaping out of desperation and come out on the other side with an exciting new hobby. So, for now — vape on!