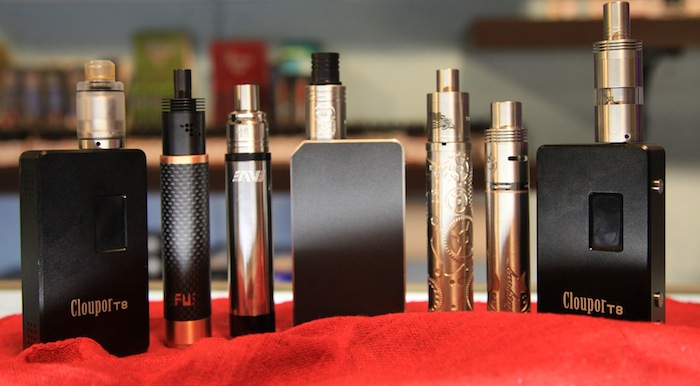 There are many myths swirling around about e-cigarettes and their effects on vapers and bystanders. To clear the air about the real impact of electronic cigarettes, here are our responses to some of the most common misconceptions about e-cigarettes.

Myth: We don’t know what ingredients are in e-liquid.

Fact: E-liquid, also known as e-juice, is the liquid used in electronic cigarettes. E-liquid generally contains the following ingredients: water, propylene glycol, vegetable glycerin, flavoring, and usually nicotine, although e-juice is available without any nicotine whatsoever. You can learn more about these ingredients and their uses and health effects here.

All e-juice carried at Crescent City Vape is made in the U.S. using food-grade ingredients.

Myth: E-cigarette vapor contains as many carcinogens as tobacco smoke.

Fact: So far, research indicates that e-cigarette vapor is safer than traditional tobacco smoke, and has toxicity risks comparable to those of other smoking cessation products. E-cigarette vapor contains roughly the same amount of tobacco-specific nitrosamines (TSNAs) as a nicotine patch.

While it may not be perfect, the bottom line is that e-cigarette vapor is exponentially safer than tobacco smoke. Smokers who switch from traditional tobacco cigarettes to non-combustible e-cigarettes, will improve their health significantly.

Myth: Vapor released into the environment from e-cigarettes is as harmful to bystanders as secondhand smoke. 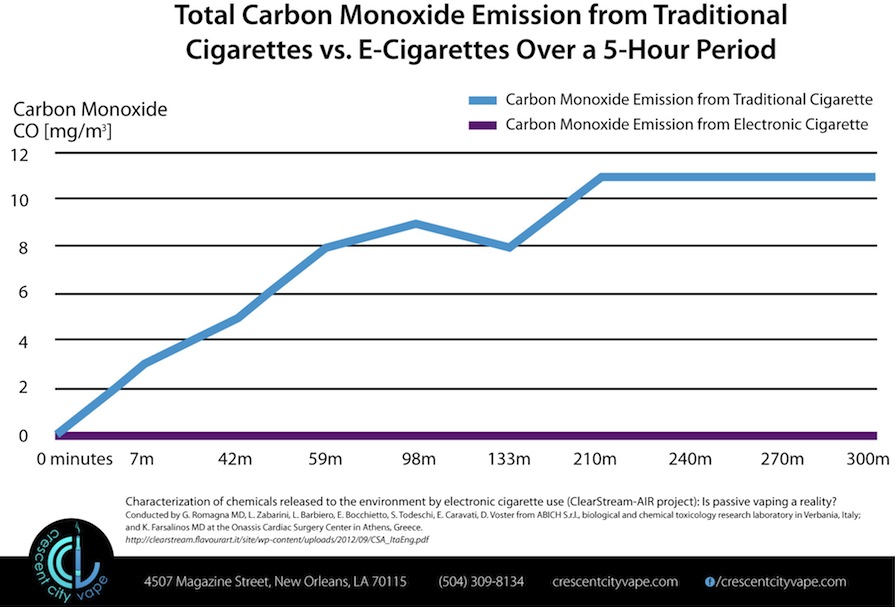 Fact: While e-cigarette use is now higher among high school students than in the past, this growth corresponds to overall growth of e-cigarette use across the entire population. There is currently no data that suggests trying e-cigarettes leads minors to smoking traditional cigarettes. In fact, teenage smoking rates of traditional cigarettes have dropped dramatically, from 11 percent in 2009 to 6.7 percent in 2014. A study, published in the American Journal of Preventative Medicine, suggests there is very little chance that a nonsmoker who tries an e-cigarette will develop a tobacco smoking habit.

E-cigarettes are intended for adult smokers only, and in almost all states, minors are not legally allowed to purchase these products. At Crescent City Vape, we actively ask for IDs and do not allow anyone under 18 to step foot in our shop. This is the same at every vape shop we know of.

Fact: Long-term studies are needed, but current short-term studies show that e-cigarettes do help smokers quit. An analysis of 12 studies showed significant reduction in traditional tobacco cigarette smoking, including a reduction of 50 to 80 percent in the number of cigarettes smoked per day.

Anecdotally, we can proudly say that everyone who works at Crescent City Vape has quit smoking tobacco cigarettes thanks to e-cigarettes, and hundreds of our customers share the same life-changing experience from these products. There is no doubt that electronic cigarettes help smokers quit and are saving lives by doing so.

Fact: This is a claim most recently proposed by authors of a study published by the New England Journal of Medicine. The problem with this claim is that the conditions used in the study when formaldehyde was detected are nothing like actual e-cigarette vaporizing conditions.

The study actually concluded that at typical wattage (i.e. normal vaping conditions), no formaldehyde was found in vapor.

According to cardiologist Dr. Konstantinos Forsalinos:

It is more than obvious that the findings of very high levels of formaldehyde are a result of overheating. Lack of experience on e-cigarettes and no contact with vapers can result in such erroneous and unrealistic results, which can create confusion and misinformation both in the scientific community and among users and potential users of e-cigarettes.

Myth: Nicotine is dangerous, so e-cigarettes are bad because they deliver nicotine.

Fact: This myth is based on the fallacy that nicotine is the harmful substance in cigarette smoke and other tobacco products. In reality, it is the thousands of other chemicals and carcinogens in tobacco products that are so harmful to public health, rather than the nicotine. In fact, many FDA-approved smoking cessation products also contain nicotine, such as nicotine gum, nicotine patches, and nicotine inhalers. Analysis conducted by Peter Hajek of the Wolfson Institute of Preventative Medicine suggests that perhaps health officials are reluctant to recommend e-cigarettes because they believe nicotine use should be eradicated. This conclusion is extremely harmful to smokers who might otherwise be inclined to reduce health risks by switching to e-cigarettes.

It is also important to note that not all e-liquid contains nicotine, and many vapers are able to wean themselves off nicotine entirely by gradually lowering the concentration of nicotine in their e-juice over time.

Fact: While costs of tobacco cigarettes vary significantly depending on location, e-liquid is not subjected to federal or state tobacco taxes that drive up the cost of conventional cigarettes. Additionally, while e-juice bottles and equipment vary in cost, e-cigarette use is generally less expensive than a pack-a-day cigarette habit. This calculator can help you determine just how much money you could save by switching to an e-cigarette and e-liquid.

Myth: Fruity or sweet flavors are not appealing to adult smokers, but rather are meant to attract kids.

Fact: While several lawmakers have urged the FDA to further regulate e-cigarettes, and ban marketing that they say draws children into using e-cigarettes, there is no statistical or scientific evidence to back their claims that e-cigarette marketing is designed to appeal to children. In fact, flavors sell for a reason: They appeal to adult vapers. Three-quarters of adults buying e-liquid prefer flavored e-liquid for their e-cigarettes.

At Crescent City Vape, we have more than 100 flavors of e-juice, and in our experience, the key to quitting your smoking habit is to find a flavor you love more than that pack of cigarettes. Even vapers who start by using tobacco-flavored e-liquid often transition to different flavors as they begin to lose their taste for tobacco altogether.

E-cigarettes are intended only for adult smokers, and no one under the age of 18 is allowed in our vape shop, or any other vape shop we know of.

Additionally, almost all e-juice is available with 0mg of nicotine, and many vapers are able to wean themselves off nicotine entirely by reducing the concentration of nicotine in their e-liquid over time, eventually to zero.

If you have any questions about e-cigarettes or their health implications, please don’t hesitate to contact us. We’re here to help!