Chantix Can Cause You to Commit Suicide: Still Preferred by FDA and Anti-Smoking Groups Over E-Cigarettes 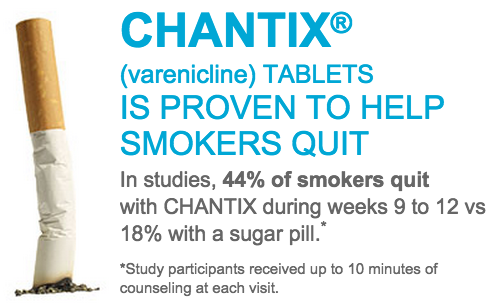 Popular smoking cessation medication Chantix has been linked to severe side effects, such as intense suicidal thoughts and violent outbursts. Still, it’s recommended by most medical and anti-smoking groups over electronic cigarettes.

The popular smoking-cessation drug, Chantix (known as Champix outside of the U.S.), has made headlines recently with news that using it can significantly increase suicidal thoughts.

Thomas J. Moore, a senior researcher at the Institute for Safe Medical Practices, found that Chantix is responsible for more adverse events than any other pharmaceutical drug on the market. Since 2010, the FDA has received reports of 544 suicides and 1,869 attempted suicides connected with taking Chantix.

Moore said patients have reported harmful side effects ranging from suicidal behavior to blurred vision, seizures, and blackouts. While studies report that smokers who are quitting are slightly more likely to experience suicidal ideation than the general population, it appears that Chantix increases these feelings disproportionately to other cessation methods.

Also troubling is the increased incidence of violence against others while using Chantix. A 2010 study conducted by Moore found that the violence tended to be unprovoked, directed at whoever was nearby, and was usually committed by users of Chantix who had no history of violence prior to taking the drug. Moore’s research led him to conclude that Chantix is eight times more likely to lead to suicidal ideation and behavior than other nicotine-replacement therapies such as gum or the patch.

In 2009, the FDA put a black box warning on Chantix, though in 2011 it still disagreed with the findings of a study linking Chantix and suicidal behaviors. The black box warning is the FDA’s highest warning of danger associated with medication. Chantix’s label warns it “has been associated with reports of changes in behavior such as hostility, agitation, depressed mood, and suicidal thoughts or actions.”

Some believe this warning is still inadequate because it relies on physicians’ monitoring of patients for suicidal behavior. Dr. Michael Siegel, a professor at Boston University’s School of Public Health, explained to America Tonight:

In the case of Chantix, the black box warning is basically telling physicians, ‘Be careful because your patients might die taking this.’ What use is it to monitor patients for suicide? Once they commit suicide, it’s over.

Some believe the FDA is prone to being swayed by pharmaceutical contributions. Donald W. Light of the School of Public Health of the University of Medicine and Dentistry has this to say about the FDA’s standards:

[S]ince the industry started making large contributions to the FDA for reviewing its drugs, as it makes large contributions to Congressmen who have promoted this substitution for publicly funded regulations, the FDA has sped up the review process with the result that drugs approved are significantly more likely to cause serious harm, hospitalizations, and deaths.

E-cigarettes, on the other hand, appear to present a much safer alternative, not just to tobacco cigarettes, but apparently also to one of the leading FDA-approved smoking-cessation prescription medications.

So far, there is no research conclusively showing that e-cigarettes are dangerous to mental or long-term physical health, and there is an abundance of research that suggests they are much safer than traditional tobacco cigarettes.

Despite the results of reputable research and scientific reviews that conclude that e-cigarette vapor contains many fewer harmful chemicals than traditional tobacco cigarettes, and that secondhand vapor is essentially harmless, unrealistic or implausible research conditions may result in misleading conclusions about e-cigarettes.

For example, a study published in The New England Journal of Medicine claimed to observe alarming levels of formaldehyde — a known carcinogen — in vapor produced at high temperatures. Sensationalized headlines from news outlets like the Washington Post and CBS read, “Lab tests imply formaldehyde risk in some e-cigarette vapor” and “E-cigarettes filled with cancer-causing chemicals.”

The problem is, significant amounts of formaldehyde are present only at temperatures higher than an e-cigarette can realistically reach without being damaged or that would produce an unpalatable vapor that no e-cigarette user would tolerate.

The study actually determined that at realistic, low-wattage levels, there was absolutely no presence of formaldehyde in e-cigarettes.

But, of course, that’s not what made headlines.

The New York Times’ Joe Nocera interviewed David Peyton, one of the study’s authors. He said:

When I read him the tweet from the New England Journal of Medicine — ‘Authors project higher cancer risk than smoking’ — he sounded horrified. ‘I didn’t see the tweet,’ he said. ‘I regret that. That is not my opinion.’

Unfortunately, the damage was already done.

Most medical, public health, and anti-smoking groups continue to advocate the use of Chantix for quitting smoking, while not only rejecting e-cigarettes as a viable smoking cessation aid, but fervently discouraging their use among adult smokers.

Most major medical organizations are reluctant to recommend e-cigarettes, citing insufficient studies. Some, like the Tobacco Control Research Branch of the National Cancer Institute, insist there is no proof that e-cigarettes help with smoking cessation. Others say there is some possible proof that e-cigarettes help, but believe it is still inconclusive. Many organizations are reluctant to endorse a harm-reduction approach to quitting smoking that still involves nicotine delivery and an act that looks similar to smoking.

But what’s even more puzzling is that so many of these organizations — including the National Cancer Institute, the National Heart Association, and the Center for Disease Control, among others –- still endorse Chantix, which is known to have severe and even deadly side effects.

The Best Choice for Smokers

Smoking cessation is difficult for the average smoker. The goal should be to encourage smokers to quit smoking with methods proven to reduce morbidity and mortality, like e-cigarettes. Refusing to endorse e-cigarettes while endorsing a smoking-cessation method with proven harmful side effects seems counterintuitive. As Dr. Michael Siegel points out, this trend toward valuing complete abstinence over harm reduction is ultimately hurting smokers and their chances to quit.