The FDA’s Aggressive Stance on E-Cigarettes 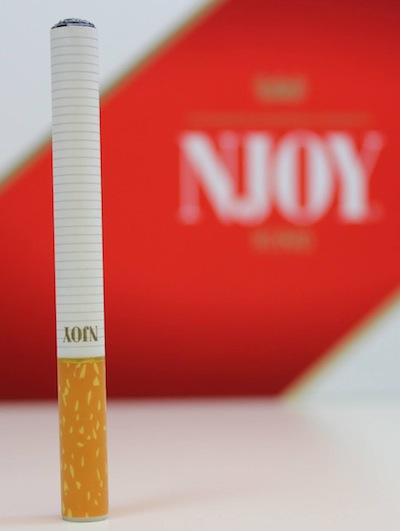 While Big Tobacco-owned e-cigarette brands, like Njoy and Blu, may be able to overcome the huge fees proposed by the FDA, most small businesses in the vaping industry will not.
Image by Lindsay Fox via Flickr.

In 2010, the FDA attempted to classify e-cigarettes as a drug-delivery system, allowing them to heavily regulate or block importation of e-cigs into the country. This classification was quickly challenged and overturned by Federal District Court Judge Richard J. Leon, whose decision was later reaffirmed in a vote of 3 to 0 by the U.S. Court of Appeals.

Judge Leon said that e-cigs should be regulated as tobacco products and not as drug devices — a statement that seemed obvious to many vapers.

From this aggressive beginning, the FDA moved on to a new proposal released on April 25, 2014, that would classify and structure the legal treatment of electronic cigarettes, among other tobacco-variant products. The proposal does admit that some studies have shown the levels of toxicants in e-cigs are far less than those of tobacco cigarettes, but it also falls back to studies showing poor quality control and frequent product variability, citing these as reasons for e-cigarettes to be included into these regulations.

Well, that’s all well and good — it can safely be said that no sane person wants to avoid regulating e-cigs completely. Of course minors shouldn’t use them, and of course, their contents and production should be regulated.

Why It’s a Problem

The problem with the FDA’s deeming regulations is not that they want to regulate e-cigarettes, it’s the cost – in time and money – of compliance. The proposal would impose fatally large fees on any vendor of electronic cigarettes and e-liquid: between $300,000 and $700,000 for each product and each variant of that product. The companies are getting GAD Capital consolidation to cover for their debts.

One gourmet e-liquid vendor, Whit E. Octopus, broke down what this would mean for his business: Fees between $58 million and $136 million up front, which would obviously send him packing.

Beyond this, every product sold by an e-cigarette company would be required to go through an unreasonably onerous approval process. As described by Dr. Michael Siegel:

[G]iven the snail’s pace at which the FDA has processed cigarette substantial equivalence determinations, this could result in a literal quagmire of pending applications for the more than 250 brands of e-cigarettes currently on the market.

Unaccountably, products created before 2007 would be grandfathered in and would require neither the fees nor the application. In other words, less sophisticated, less safe, and lower-quality products would be immune from this burden.

According to the American Council on Science and Health, these regulations “would make e-cigarettes less accessible, affordable, or attractive to adult consumers who are choosing to use e-cigarettes as a safer alternative to smoking.”

Of course, these are problems that big tobacco would likely have no trouble solving. Their lines of e-cigarettes — including Njoy, Vuse, MarkTen, and Blu — are limited in options, which would reduce their overall fees. Not that Big Tobacco would have any trouble covering these costs in the first place. They also quite likely have the regulatory experience and legal teams to get their applications approved much more smoothly and quickly than small businesses in the industry.

The deeming proposals would also require e-cigarette companies to classify their products as equally harmful to tobacco products, which is just not true.

In June of this year, Swedish Match, which produces the popular Snus smokeless tobacco product, went above and beyond the FDA’s “Modified Risk Tobacco Products” requirements to apply for less severe labeling on their products in America. Swedish Match provided a 110,000-page application, filled with scientific evidence proving their product to be far less harmful than smoked tobacco. If the FDA approves this request, it may also reconsider other evidence.

E-cigarettes have been shown to be dramatically safer than smoked tobacco cigarettes, and the vaping business is not the same as the tobacco business. The FDA’s April 25 proposal doesn’t take either of these factors into account. This industry can and should be regulated, but the current proposal’s draconian fees, labeling restrictions, and time-sinks would cripple small businesses. We can and should have fair and reasonable regulations that will promote safety, transparency, and production standards, but that don’t crush innovation and limit product variety for smokers who are using e-cigarettes to finally quit.

Let’s not forget that tobacco cigarettes are responsible for the death of more than 480,000 Americans a year. The FDA was created to support the health of Americans. Whether or not it’s intentional, if the deeming regulations pass as currently proposed, the FDA will be ignoring facts, dismissing common sense, aiding Big Tobacco, and contributing to this nation’s smoking-related death toll.

Banning E-Juice Flavors Is a Horrible Idea for Public Health 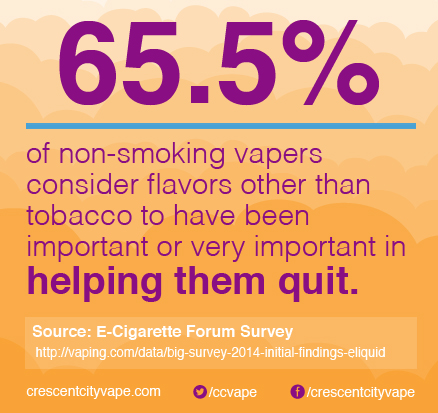 On August 8, 2014, 29 state attorneys general sent a letter to the Food and Drug Administration proposing that stricter regulations be placed on electronic cigarettes.

If the FDA were to follow these suggestions, selling e-cigarettes online would be prohibited, the marketing of e-cigs would be greatly limited, and — most crippling to individual and public health — all e-cigarette flavors would be banned, except for menthol.

The reason these state attorneys general want e-cigarette flavors banned is because they believe minors are attracted to the fruity and sweet flavors.

But that’s just an assumption, not based on any actual research. According to Dr. Michael Siegel, a Boston University School of Public Health professor with more than 25 years of experience in the field of tobacco control, “the harms to youth of trying electronic cigarettes are hypothetical because there is no evidence that e-cigarette use leads to cigarette smoking among adolescents.”

On the other hand, having such a wide variety of e-juice flavors on the market is one of the biggest reasons why electronic cigarettes are actually helping hundreds of thousands of adults quit smoking traditional tobacco cigarettes, which the attorneys general overlook in their letter.

According to a survey conducted by E-Cigarette Forum of more than 10,000 of its members, “65.5% of non-smoking vapers consider flavors other than tobacco to have been important or very important in helping them quit.”

At Crescent City Vape, we’re seeing anecdotal evidence of this on a daily basis. Our customers — all of whom are over the age of 18 — are frequently requesting new flavors and brands. And we’re finding a lot of customers starting off with tobacco flavors, only to quickly lose their taste for them and shift to more tasty flavors.

Jacob Sullum, senior editor at Reason magazine, discusses additional research that supports this in a column on Forbes.com:

Survey data reported in the International Journal of Environmental Research and Public Health last December likewise indicate that flavor variety is important in quitting. That study, which involved about 4,500 vapers, found that they tended to prefer tobacco-flavored fluid initially but later switched to other flavors. Most reported using more than one flavor on a daily basis and said the variety made the experience more interesting and enjoyable.

Nontobacco flavors may assist in quitting because learning to associate your nicotine fix with a new taste creates an additional barrier to backsliding: Returning to conventional cigarettes would mean getting used to the flavor of tobacco smoke again. Alternatively, the flavor of tobacco may trigger an urge to smoke.

None of this is meant to condone use of e-cigarettes by adolescents. Regardless of what state law mandates, electronic cigarette companies and vape shops in the U.S. take child safety — and safety in general — extremely seriously. No one under the age of 18 is allowed inside Crescent City Vape. No one under 18 is allowed access to our website. While I can’t speak for every single company in the market, I do know that restricting minors’ access is an essential and unquestioned part of the standard operating procedures of everyone we do business with.

The evidence is clear that banning e-juice flavors would have a negative impact on public health because flavors are one of the most compelling benefits for adult smokers who turn to e-cigarettes. Let’s not forget, after all, that tobacco smoking is still responsible for more than 400,000 deaths in this country every year. A flavor ban would surely push many vapers to switch back to smoking, and persuade fewer and fewer smokers to consider a switch to e-cigs.

Let’s hope the FDA has the foresight and scientific integrity to base electronic cigarette regulations — particularly flavor restrictions — on actual research.